It feels like I've been working on the Haruni shawl forever, since I've frogged it twice already. But today it was finally done, and now it's blocking upstairs. I was a bit scared of the crochet bind-off, but that one was actually pretty easy. When I came to the cast-off I had about 500 stitches in total, and I think it took about an hour to finish the cast-off. Then it was time for the blocking, which was a completely different story. I think the blocking took over two hours! But it was sooo worth it, just look at it: 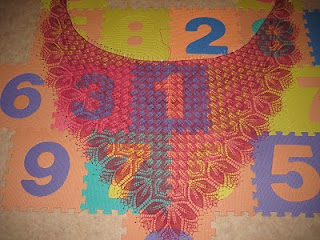 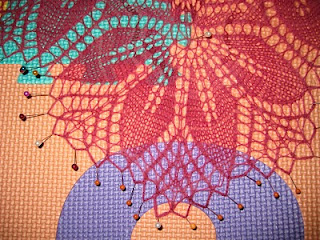 I LOVE it! And I finally have a pink shawl again! I made a Candle Flame shawl last year in a pink Garnpaletten yarn, but I gave it away this spring, to my grandmother. She loved it so much, so it was totally ok to give it away, but I've missed having a pink shawl. Now I have one again!
This was my eight shawl this year, so I'm doing very good time as I'm planning on making ten this year (remember, the 10 shawls in 2010 group on Ravelry?). I think I'm going to cast on for the India Stole tonight, I'm planning on making it with my Chili Gredelin Simone yarn in colourway Sheer Apricot.
India Stole (photo borrowed from Ravelry) 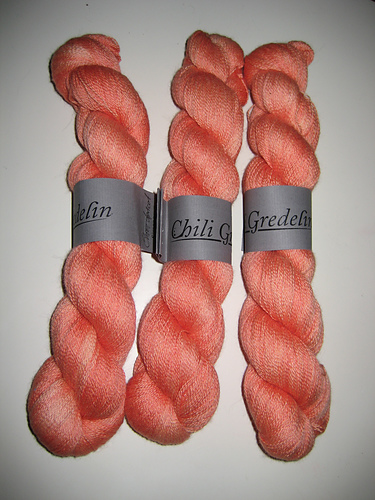 I haven't made any stoles yet, so this will be new to me. I'm very excited to make it, as I've had it in my favourites on Ravelry for ages. I think the pattern is charted in the same way that the Sari Lace triangle (the same designer, Sylvie Beez) and Murdered by Lace (designer Kalinumba) shawl were charted, that is that every stitch is included in the charts. Meaning wide charts!
Or, maybe I should just work some more on the projects I have already going? But I think I want to have at least one shawl on the needles, otherwise I think I might get bored. Plus, it's not really the season for gloves or heavy sweaters, as we've had about 20 Centigrades here this past week :) So I think I shawl (or stole) is just the thing!
/ Jenny
Posted by Jenny at 17:43

Email ThisBlogThis!Share to TwitterShare to FacebookShare to Pinterest
Labels: shawl

Your Haruni is gorgeous!! Can't wait to see it on you. I think it ended up more open than mine, which I think makes the lace even prettier! :)

I was totally thinking to myself "hey, maybe I"ll make that stole with Jenny" until you said EVERY STITCH IS CHARTED! I don't know if I could do that. LOL

Me and my Blog

My Works in Progress