Yes, I know that I should be outside to take advantage of the super nice weather we're having, but I really can't spend any more time in the sun without burning. Plus, it's the middle of the day, and then you really shouldn't be in the sun, so I'm taking a little break.
Today is the first day of the two week long Creativity Boot Camp that I'm participating in. I'm not sure if I'll be able to blog about it every day, but I'll try. Today's assignment was to write a letter to myself, describing what goals I'm planning on achieveing these two weeks. The twist was to write it as if the course was already done, and be sure to tell myself how well I've done! I'm not going to reprint my letter here, but I've decided that for me this course will be about dsigning knitted stuff.
We're also going to get a daily word to be creative about, and today's word was "Ivory". I immediately associated it with the Ivory Tower, from the Neverending Story book by Michael Ende. It is one of my altime favourite books, and I also love the movie, so I thought: Why not design a lace shawl with patterning inspired by shapes from the movie/book? So I've spent a good hour of the morning searching for inspiring photos online from the movie, and also doing a lot of scetches by hand. I can't draw for squat, but at least I think I have an idea of what I want it to look at. I'll continue the process over the coming week, and maybe even show some of the progress to you!
I aslo have a lot of other insirational books to draw from, so possibly there will be a whole series of knitted stuff to come :)
And now for something completely different: Yesterday me, Thomas and my sister, Sanna, visited a local flea market, Loppis i Djupdalen, and it was really fun! I've not been to very many fleas before, and it must be almost 20 years since the last time, but now that we're buying a cottage (no, we still haven't heard from the bank) we wanted to see if we could find any vintage-looking furniture and other stuff. We didn't buy any furniture, but I came home with my very own spinning wheel! 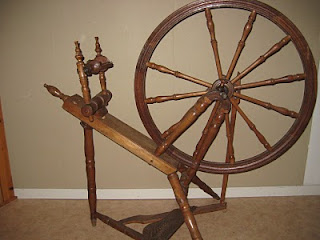 I love it, and I love that it's wood coloured. I have one at home that's on loan from my mother's work (she works at a school), but that one is painted a grayish white. The one I bought is so much prettier, even though the wheel is missing one spoke. I don't care about that though, I love it anyway. I just have to put in a new piece of string to run the wheel, but that should be pretty easy. I haven't had time to do it yet though, but maybe later next week. The wheel cost just over $15, and I couldn't be happier!
Thomas has plans to start brewing his own beer, as he is a beer afficionado. He likes to try new kinds, and he even has a beer blog (that he very seldom writes on, but even so). He found a huge glass bottle (the name for it in swedish is damejeanne, I guess that's a french word from the beginning) that is used for brewing stuff, and it didn't cost him more than $5! So we both made really good finds, and we're very pleased with the whole adventure. I'm sure we'll visit more than once, as they are open every Saturday for the whole summer.
I also made Thomas take some photos of me wearing the Haruni shawl, so you'll get an idea of how big it is. I love this size, as I can easily wear it over my shoulders like a shawl, but it can also be scrunched up and worn around the neck. 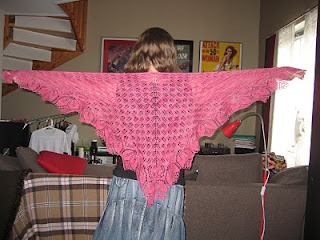 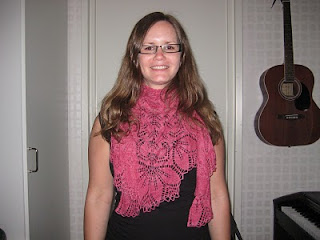 Finally, I also started the India Stole this past Friday, but I haven't really made enough progress to warrant a photo yet. I'll knit on it this week, and show it to you later on :)
Now I'm going to get some cleaning done, so I don't have to do it after work during the week!
/ Jenny
Posted by Jenny at 14:09

You and your shawl are gorgeous! :) And your spinning wheel!! How cool is that? I bet you could replace the missing spindle if you wanted to. Way cool!

Love the shawl! It's stunning!

I'm excited about the Creativity Bootcamp as well! It should be really fun!

What a great deal on the spinning wheel!!! I really like the pink color of the shawl! Didnt even notice the missing spindle until you pointed it out. That should be pretty simple to replace, if you wanted to.

Me and my Blog

My Works in Progress